What "Negative News" Should Mean to Current AML and Compliance Professionals

As part of their work, due diligence analysts and suspicious activity investigators must properly search for “negative news” information.  If they do not, an AML program cannot be considered effective.  Recent enforcement actions, fines, and personal penalties against AML Officers prove this point.

What, however, is meant when AML professionals refer to “negative news?”

The term “negative news” emerged on the AML scene nearly two decades ago when banks first began to address financial crime risk.  The term, as it is currently used, does not capture the wide array of searching and research practices that must be carried out every day by AML analysts and investigators in order to comply with regulatory rules and expectations.

Operating without clarity around what constitutes “negative” information and how it should be found, creates serious risk for AML officers, AML compliance programs, financial institutions and even the regulators.  If an AML officer thinks “negative news” is a term related to media reports and not much else, then his or her program is likely weak and ineffective.

The Definition of Negative Information

When hearing the term “negative news” most AML professionals imagine newspaper articles reporting information about local, national or international crime.  Searching for and finding such news articles is essential for strong AML compliance.  However, “negative news” entails much more than just newspaper stories.

“Negative news” (also referred to as “adverse media” or “derogatory information”) is a euphemism.  A better way of thinking about what due diligence and suspicious activity analysts are searching for is really, “all publicly available relevant risk information.”  That is a mouthful and not likely to be coined anytime soon into AML lexicon.  However, finding “all publicly available relevant risk information” is what AML programs must do to be effective and safe from regulatory and enforcement penalties.

What Is “All Publicly Available Relevant Risk Information?”

In addition to newspaper and other media reports, here are other sources of relevant public risk information that all AML due diligence and suspicious activity investigators need to search: 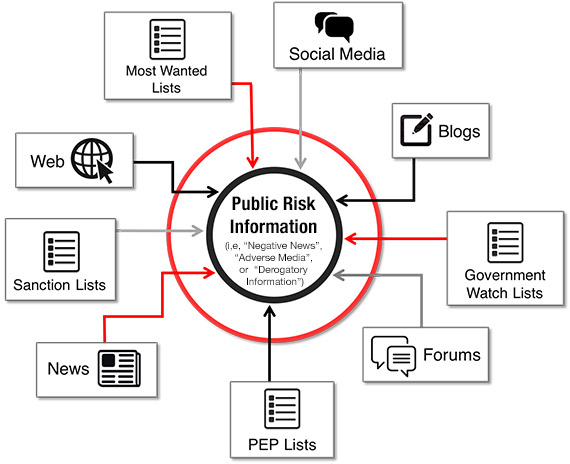 So whether you are an AML Officer, and AML analyst or a regulator, the next time the phrase “negative news” arises, realize that it is so much more than many think it to be.  In that fact lies a great deal of risk because existing applications used by AML analysts and investigators capture only a small fraction of the publicly available relevant risk information.