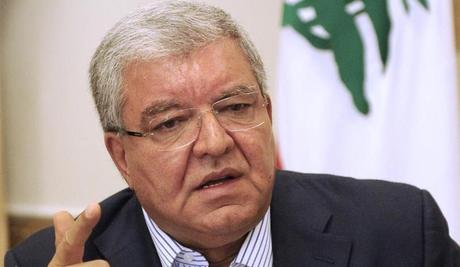 Interior Minister Nouhad al-Mashnouq said on Wednesday that the Lebanese pound faces a real threat if Lebanon fails to hold a legislative session to adopt a number of financial laws before the end of the year.

“The Lebanese pound faces a real threat for the first time in 22 years if Lebanon fails to adopt a number of financial laws before the end of the year,” said Mashnouq to the al-Akhbar daily.

He explained that the World Bank and international bodies are waiting for Lebanon to approve the laws of “anti-money laundering, amending the tax law procedures and the transfer of funds across the border.”

The minister's comments came in parallel with media reports pointing to a letter sent by a Lebanese formal body to the parliament, premiership and other officials pointing to the end of the international grace period given to Lebanon before its classification among the “worst in financial and economic performance.”

The letter pointed out that Lebanon has an opportunity before the meeting of Financial Action Task Force on Money Laundering FATF, also known as GAFI, in early February that it has to take advantage of it to pass laws sent by the Central Bank of Lebanon to the government and that need the approval of the parliament.

According to the letter, the parliament has a short period of time to pass the legislation otherwise Lebanon faces the possibility of having restrictions on the banking and financial transfers, which would in turn reflect negatively on the remittances that have been estimated by the World Bank in April last year worth $8.9 billion.